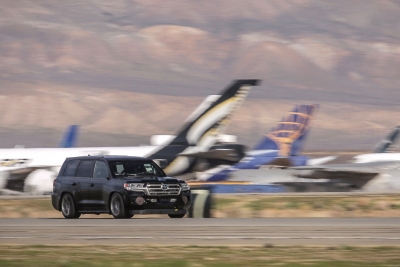 World’s fastest SUV by Toyota achives 230.02 MPH
Toyota NASCAR driver Carl Edwards came out of retirement to drive the Land Speed Cruiser in the Mojave desert. The sole purpose of this drive was to beat the world speed record.

The SUV was lowered and the frame was narrowed by 3 inches for the Michelin Pilot Super Sport tires, in order to achieve optimal aerodynamics and stability.

"At 225MPH, the thing was wandering a little bit," Edwards said. But he kept pressing on the pedal and broke the 230MPH barrier. If he had longer paved driveway, the SUV could have gone faster.

The next step for Toyota's engineers may be developing an anti-graviton suspension system and make the vehicle glide. Then, we won't need the roads.